Finding the best places to eat in Paris can be overwhelming for you since food is only second to romance in the European city of light. And indeed, made more daunting if you feel like you HAVE to get it right the first time. I'd argue that one of the best parts about food is, you can always eat again - so i preface this with saying, don't be afraid to make mistakes. In fact, the adage ...if at first...yada yada..try try again, im sure thats what they meant. The second note of interest on this post - many tourists may not realize it's not always about French food and emptying your wallet to have a good meal.

The great thing about Paris eateries is that they cater to the world, offer different food styles, and budget levels. If you've avoided traveling to Paris because you thought you'd have to spend extravagantly on food, don't worry. Be sure to try everything  including bistros and  street food.

Although the choices are endless, and constantly changing, here are a few "food for thought" suggestions to help get the process started!

Epicure (in the Le Bristol Hotel) 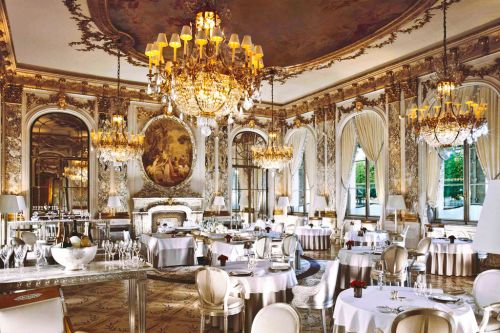 Last year, Epicure received votes as the finest hotel restaurant in all of Paris, which is saying something considering how many hotel restaurants there are. While they serve mostly traditional French food, they also serve numerous European dishes. Still, the menu gets designated as progressive French, meaning you'll get things you probably haven't seen before.

Customer comments about Epicure on Trip Advisor are glowing. You'll find traditional dishes, though it's worth trying exotic plates like wild turbot, pigeon breast, and blue lobster. They're also renowned for their chocolates, which includes a unique chocolate sphere for dessert.

So many five-star bistros exist in Paris that you almost have to pick at random. One you shouldn't pass up is L'Office, which continually gets five-star reviews from restaurant critics in the region.

One notable thing about L'Office is that it's in a neighborhood not typically known for bistros. The interior is unique as well with big mirrors and giant pillars covered in wallpaper.

The menu stands alone, including a salad appetizer with squid. Try the thin and crispy sliced pork as the main course that's covered with beans and samphire. 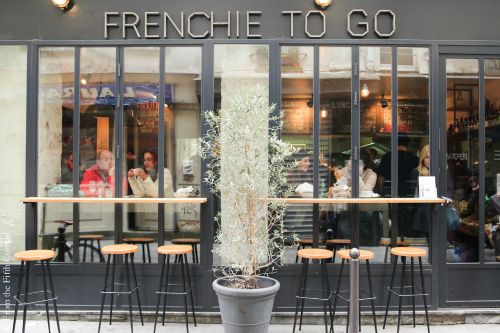 For a little taste of America in Paris, try out this fun deli with an equally smile-inducing title. It's a rare place to get French food and wines on the go, which is perhaps perfect if you have a busy life or itinerary.

It's part of a restaurant franchise owned by Grégory Marchand and his team of owners. While here, you can get very American food like a Reuben sandwich, scones, and muffins. I truly only mention this  for two reasons. 1.) becuase most of our traveleres spend time away from home for months at a time, it can be comforting to get a taste of merica. 2.) finding all day breakfast is such a rarity in other countries!

While it's usually crowded to eat inside, take some time to eat your food at an outdoor table to people-watch in Paris's Little Egypt neighborhood.

Many of the above choices require spending more, though it doesn't mean you can't find many places to eat on the cheap. Soul Kitchen is a small little café that's next to the Montmartre steps. Operated by three local women chefs, you'll find excellent quality here, especially since each dish gets made with local, organic ingredients.

The menu is different from any other restaurant in the area. Try their amazing French pizza called "Granny’s Pichade."

In this restaurant, you'll find something unusual for Paris: Tacos on the menu. Candelaria is really a hidden Parisian gem that's designated as a real Mexican restaurant.

Their taqueria is open all day and every day where you'll also find very reasonable prices. Tortillas here are homemade, with special attention on extremely hot spices. It's one way to feel like you're still in California or Mexico while still enjoying the pleasures of Paris.

Contact us here at Auto France Inc. so we can provide a reliable long-term rental car to travel through Paris. We work with Peugeot cars to assure your safety.