Germany is more than just Bavaria. Most first-time travelers may think of the country as being comprised of beautiful mountain landscapes and perhaps not-so-beautiful Lederhosen (depending on the wearer). But in reality, it's a diverse country that can offer something for everyone.

For example, Germany's coastal lands are well-known within the country for their beauty and uniqueness. This 7-day travel itinerary can help you experience the country's waterfront and bring back memories for a lifetime in only a week. 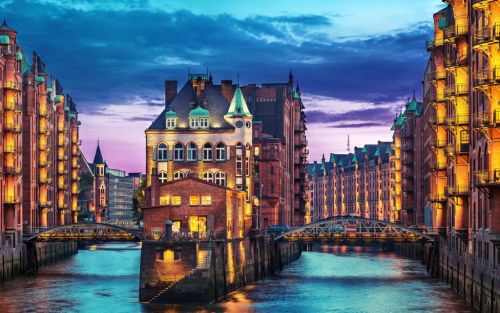 At Auto France we have two locations to pickup a Peugeot in Germany, Frankfurt and Munich. If you arrive in Frankfurt, your first step should be to get to the country's northern Metropolis: Hamburg. Just a few hours away by car, Hamburg is home to almost 2 million residents along with the second-busiest port in Europe.

Since its founding more than 1,200 years ago, the city has derived its fame and fortune from a rich seafaring culture. Here, you can visit the Speicherstadt, a warehouse complex reminiscent of Venice with canals for streets that was declared a UNESCO World Heritage Site in 2015. The port itself is home to a number of museum ships, such as the freighter Cap San Diego and the sailing ship Rickmer Rickmers.

Day 2: A Boat Ride to Helgoland

From Hamburg's port, you can take a day trip to Germany's only offshore island: Helgoland. In just 75 minutes, a catamaran ferry gets you to the island, inhabited by just over 1,000 residents on a permanent basis. The island's most distinctive feature are its red cliffs, but it's also famous around Europe for its Helgoland Lobster. Helgoland has been praised even by Germany's most famous author, Johann Wolfgang von Goethe.

Back in Hamburg, another convenient daytrip awaits: Sylt has been described by the New York Times as Germany's Hamptons, as countless celebrities make their home on the North Sea island.

At the same time, it's also an ideal destination for Northern Germans simply wanting to enjoy the wind, sea, and beach of the North Frisian islands for a day. The island is accessible via car-carrying train, getting visitors from Hamburg over the Hindenburg Damm and to its main city Westerland in just under 3 hours.

While enjoying your time in the North Frisian islands, you have the perfect opportunity to experience another opportunity unique to the German, Dutch, and Danish North Sea: the Watt. Here, thanks to unique sand and low sea depths, the water can retract for miles and lay bare a clay that's both nourishing and fun to walk on.

Its unique features make the Watt the second UNESCO World Heritage Site on your trip. Take a guided tour, or explore it on your own - but pay careful attention to tide schedules as the returning water can turn mud into North Sea in a matter of minutes.

From Sylt, take a trip to Luebeck - despite its relatively small size, one of the most famous cities in Northern Germany. Here, you can appreciate the differences between the North and Baltic sea, while also taking a stroll through the remarkable old city. The Holstentor city gate and 13th century St. Mary's Church are particularly worthy of a visit.

From Luebeck, it's just over two hours by car to Ruegen - Germany's largest island, located toward the east of the country in the Baltic Sea. It's particularly famous for its white cliffs and beaches, the latter have given it the nickname of Germany's mediterranean island among residents in the region.

Finally, it's time for the trip home. If you leave from Frankfurt, you will want to plan in a travel day - via car, the trip takes between 7 and 8 hours. But if you have the right rental car, that time on Germany's Autobahns will fly by. And before you know it, you're back in Frankfurt, ready to take the trip home with a fuller understanding of Germany's waterfront.

The above itinerary is realistic with a car, using Frankfurt as your home base. So in your planning, be sure to find the right car that fits your group size for a trip from the North to the Baltic Sea. To learn more about how we can help you find that car, contact us.